The renowned freedom fighter Gobinda Prasad Singha endeavored to set up a higher educational institute in the remotest part of the Bankura District so that the students can avail adequate facilities. The College was established in 1985 and was affiliated by the University of Burdwan on 20-09-1985 on temporary basis and later on 30-08-1988 on substantive basis in order to extend higher education in the most backward areas of the district.

The teachers’ council and the students’ council are functioning smoothly since the inception of the college. Following the statute of the University of Burdwan, Ad-hoc Governing Body was constructed and it was effectively performing till 15-12-1987. Regular Governing Body was formed first on 15-12-1987 and is working progressively with cordial relation among all the stake holders of the institutions in particular and the society in General.

The college received financial assistance from different sections of the society including Bankura Zila Parishad, Gangajal Ghati Panchayat Samity, Gangajal Ghati Gram Panchayet, Local MP LAD grant, Planning Govt. of West Bengal and UGC grant. But the grant cannot fulfill the requirement that the College at present needs for the overall infrastructural and academic growth of the college. 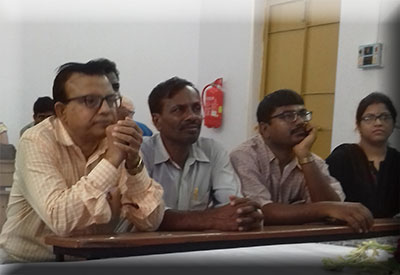 The College is too small with limited staff, classrooms, resources etc. It cannot provide sufficient classrooms for extending its affiliation to additional subjects and Science Stream. Though limited in number and resources, yet is infinite in aspirations. The small family that we are of, we look forward to construct such holistic academic arena within the college campus so that we can promote excellence in Higher Education, empowerment through knowledge, radical growth in socio-economic aspect and sustainable development in academic fields. The College is striving hard to extract the highest returns in terms of producing fruitful results with the existing faculty members and resources. We have already ushered into the world of e-governance in all academic and administrative activities of the college. IQAC was formed on 20.08.2014 and is functioning effectively to develop several quality assurance mechanisms within the existing academic and administrative system.